On my birthday (Feb 23) I had the chance to go out on a challenge team into Trenchtown in Kingston, Jamaica to work on the Baths of Joy. The project lasted 2 weeks and our goal was to repair and improve the facility. I was able to go along only because I am a plumber. Normally a STEPper wouldn't be able to go on a challenge team for that long but since a plumber was needed I got to go! 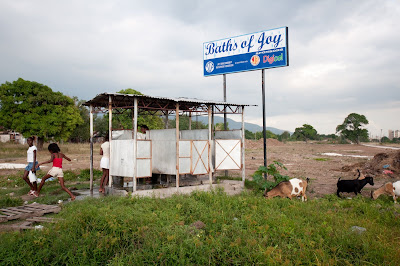 This is the first day we came and began to make plans as to how we were going to go about making the changes and improvements. As you can see above there was a lot to be done. There was only one place where you could still get water from and there wasn't even a valve. Just a piece of rounded wood pushed into the end of the pipe to stop the flow of water. 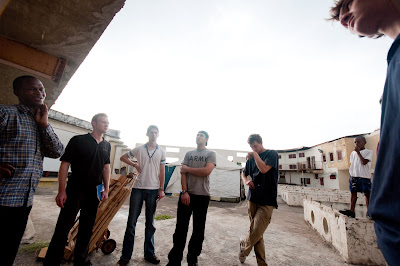 This bathroom (below) was across the street in an old theater that we worked on also. The theater is now being used as a classroom/meeting place for some of the local Christians. I installed 2 toilets, 2 urinals, and 2 sinks. Everything is very rough compared to the way we do things back in the states. 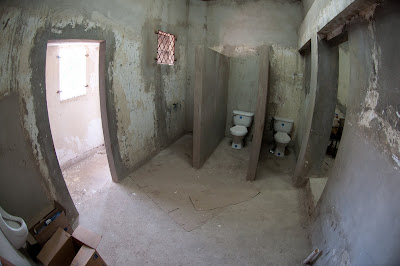 Almost every street in Kingston looks like what we would think of as the ghetto. There are only a few areas that are maintained in the way that is considered "normal" back home. Every day we would drive from the ship at 8:00am and try to be back to the ship by 5:00pm. The drive is about 30 minutes and one morning near the beginning of the first week the traffic was really slow. We finally noticed that there had been an accident in the opposing lane of traffic. I noticed one vehicle with the windshield and parts of the roof smashed in. People generally drive pretty fast on this road, probably about 50 - 60mph. I didn't see the other object which the car had hit until we kept driving about 100 yards. Then I saw it, or rather, him. There was only one officer present and he was taking pictures of the vehicle. It was like it was no big deal that there was a person lying on the road. Was he dead? Why wasn't he being attended to? The man was lying in the middle of the road. In a puddle of his own blood. Who was he? Did he have a family? Does anyone even care? But was he a Christian? I'll never be sure.
The rest of the bumpy car ride was mostly silent. Starting to work once we arrived was difficult. I couldn't keep my mind on my work. I just kept picturing him lying there. Uncovered. Alone. I really started thinking about and evaluating my life and how I think and do things. Next time you're confronted with a situation where you have the opportunity to talk with someone you think isn't a Christian do it! It may be their last chance.
This is normal here in Jamaica. Although this was an accident it isn't far away from what happens quite often intentionally. Jamaica has the third highest crime rate in the world. Jamaica needs hope. I pray that we, the Logos Hope, are making a difference. 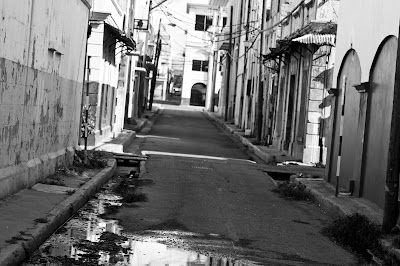 (Below) During the project the people weren't able to use the building so they had to do their washing elsewhere. It is really neat to see that what we are doing is something that is such a need in the community. 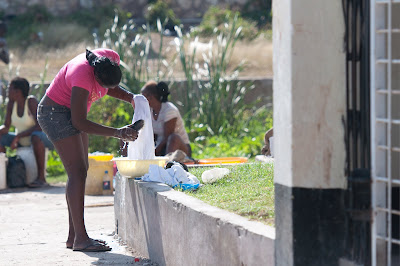 The problem with the community and its condition is the attitude of the people. They think that they shouldn't have to take care of it and that someone else should help them maintain it. I was talking with one of the locals that we were working with and he thought that maybe 15% of the people that use the Baths of Joy facility will actually try to take care of it. The other 85% will most likely neglect, steal, and disrespect the work that we have put into the project. This community needs prayer and I hope that they saw something different in us as we worked around them for 2 weeks with no pay whatsoever. 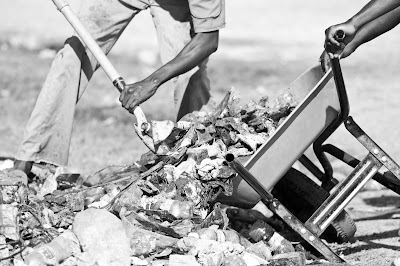 One of the local ladies who uses the facility offered to do upkeep on it. I thought that it was awesome that at least one person would be willing to maintain something that was a gift to them but I soon found out that she wanted to be paid to maintain it. It just goes to show how much the community feels like everyone "owes" them. 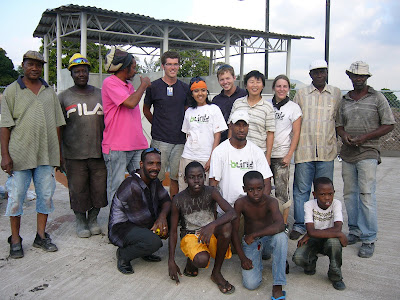 After 2 weeks and a lot of hard work this is what we were able to accomplish. We poured a giant pad of cement that was all hand mixed, fixed all of the plumbing problems, straightened various parts of the shelter that were bent out of place, and finally touched everything up with some paint. 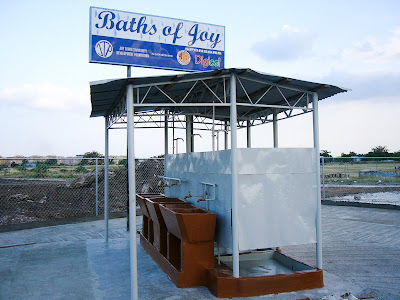 My challenge team experience was such a blessing and I hope to do more in the upcoming months. It is really nice to be able to get off of the ship and go out to work on projects that provide basic needs for the people.
Please pray for Jamaica.
Posted by Unknown at 7:33 PM

This really is an eye-opener. We are pretty spoiled, that's for sure. Thanks for the update....we read them during school on the big screen. The kids love seeing "Ben" up there. We are praying for you and the ship ministry!

Wow Ben!! Your Grandpa was telling me about this--and I thought his shirt buttons were going to pop-off with pride! It's so neat to see how God is using your gifts and talents in ways that you weren't even expecting! Praying for you and the Logos!

I got teary reading this. It really made me think about how often I neglect sharing the most valuable thing I have with people...Jesus Christ. Thanks for the reminder, Ben!

When I read this I cried. Your right, Ben, if you have the opportunity to witness to someone, then do it. Especially if you will never see them again, or if they are in a difficult situation. I will never forget the times I have not, and the people I didn't talk to. The worst case was a girl I saw when we were in Manitou Springs.
I am praying for you and I am reading faithfully. Keep posting!
Olivia