I'm not sure if you've noticed but lately I haven't been updating my blog frequently. This is mostly due to my poor time management skills. I could say that I'm just really busy but everyone says that. Truth is I've been putting in very long hours working for my dad doing various HVAC and plumbing work. I've been averaging 10 hour days since I returned from Colorado. 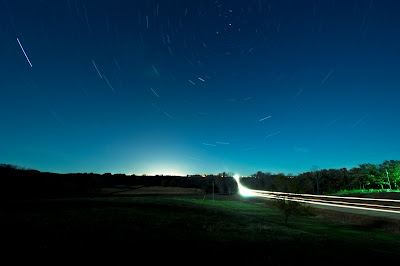 Even with the long hours I have been able to squeeze in a few pictures here and there. Lately I have been really captured (forgive the pun) by long exposures of those little sparkling lights in the sky we call stars. The above picture was taken after I was done with work at about 11:30pm. Reuben came along to keep my company while the exposure was being completed. 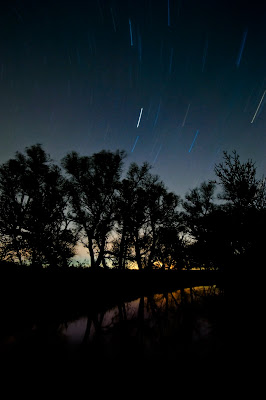 Every time I take a picture with a long exposure, (*10 seconds and up) my camera perform what is called "Long exposure noise reduction". This process attempts to eliminate as much of the "digital noise" generated by the long exposure by processing the image for the same amount of time it took to actually take the picture! This means that if I were to take a picture that was a 30 minute exposure I would have to wait an entire hour before the camera would be ready to take another! Very cool technology but somewhat annoying... 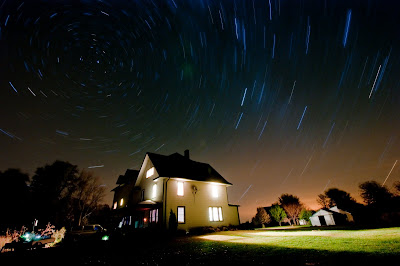 Taking star trail pictures is not very difficult. The hardest thing is finding a perfectly clear sky with no major cities near you. The smog, combined with the city lights, will over expose your pictures and what could have been crisp star trails become nothing more than uninteresting smears of light. That is why you don't see pictures of the Eiffel Tower with the stars streaming behind it.
The other part of taking star trail pictures is your exposure. If you are going to take really long exposures you really don't want to have to take very many test shots. I bet you can figure out why! So think through your camera settings before you take a 30 minute shot!
I've found that for a 30 minute shot the following settings work best for me:
ISO 200
f/8 (Gives you a good DOF)
Shooting in Manual mode with the shutter speed set to "bulb"
Use a remote trigger
*Approximation
Thanks for reading!
Posted by Unknown at 11:08 PM

I have really enjoyed these photos, Ben--they're awesome! Thanks so much for documenting how you exposed the photos. Now I want to try to capture some star trails. :)