Well, The Sound Of Music is now over. How sad! It all went by so fast! It was a lot of fun and a great opportunity to get to know other people from the community. This, being my first performance in a production of any significance, was a challenge at first but as time went on I was able to fit into my part more seamlessly. Towards the last few practices everything was ironed out as far as my dialog, singing, and choreography. The first performance was a bit nerve-racking but once I was finished with the 16 going on 17 scene I felt awesome about the rest! The next three performances went with a degree of excellence. To the left is Captain VonTrapp. I am to the right if you can recognize me under all of that makeup! The Captain and I never got along on-stage but had a lot of fun off-stage! 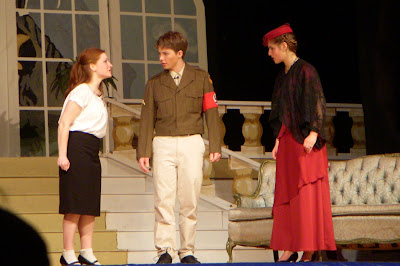 This is from the scene where I was giving the VonTrapps a last warning that the Captain had better reconsider his views or get out of the country! Leisl, (Megan Gilmore) to the left, is shocked at the way that I am speaking of the Captain along with Maria, (Maria Schmidt) to the right. 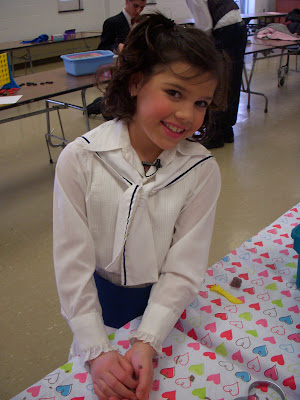 This is Gretel. She was the youngest VonTrapp. I thought that this picture was way to cute to not post! She was playing play dough! How fun! They had all sorts of things to do in the cafeteria during the productions because they didn't want the little kids in the choir to "break their necks running around in the hallway." Poor kids, confined to play dough and crayons. 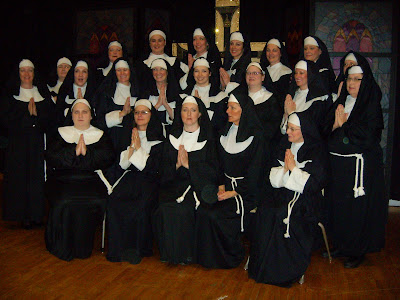 These are the party nuns. This title was earned because they were able to break out of their nunly roles to become the formal dinner guests at the party held at the VonTrapp home before returning to their habits once again to finish the rest of the play! Word is that they had a blast backstage. Don't let their proper attire fool you! 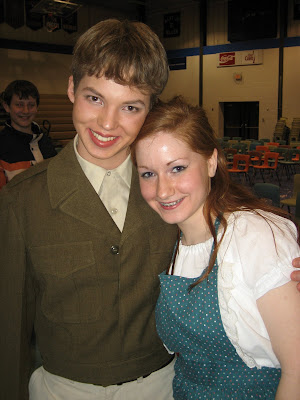 Leisl and I after a performance.

Thanks to everyone who came to see us!
Posted by Unknown at 10:36 AM

I wish that I could have come! It looks like it was so fun!

You did a super job Ben! I was very proud of you and totally loved the play!

Looking forward to the next one! :)