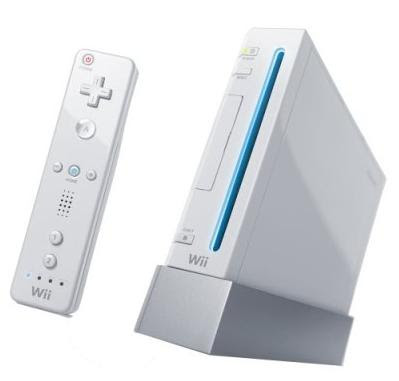 After all of us kids (with help from mom) finally convinced my dad that we should get a Wii, everyone was excited. Now, getting your hands on a Nintendo Wii is a little tricky because the moment any Wii comes into stock at a retailer it is out of the door just as fast as it came in! We had gone down to Sioux falls to do some shopping and I thought that we would have been able to get one while down there. I was wrong. I had been checking around and no one had a Wii in stock anywhere in Sioux Falls. Once home, I started to call Marshall's stores. After about three weeks I called Wal-Mart and they said that they might get a few in stock later that day. I called them that afternoon and they said that they had 5 in stock! I was excited! I called my dad because he was in Marshall at the time and was able to get one picked up! 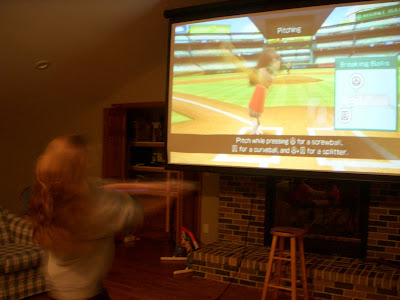 We set up the Wii in our family room and connected it to our projector. The innovations that the Wii works into gaming make it a much more interactive gaming system then previous consoles. We purchased two games; Wii Sports and Wii Play. The little kids enjoy bowling, which is nice because you can have 4 players at a time. They also like to fish, race cows, and shoot clay pigeons. Fun fun!


Above, Annika and my dad are trying to figure out the baseball. My dad was throwing some nasty curve-balls! Poor Annika. Remember though, this was one of her first times playing so don't judge her to soon or she just might knock the socks off of you if you take her on in a game of Wii baseball! 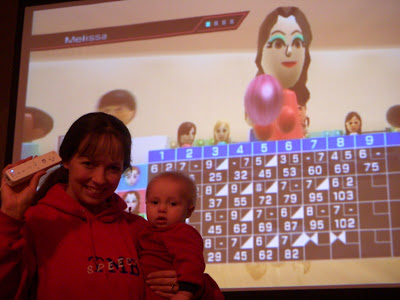 On the Wii, there are channels such as weather, news, games, pictures, and the Mii channel. The Mii channel allows you to create your own character, allowing you to change the hair, eyebrows, nose, mouth, etc. Above is my mother's Mii while bowling. Any resemblances? Come on over and try your skill! I have a lot of siblings. One of them is bound to be at your skill level!
Posted by Unknown at 11:07 AM

This is so fun! I can't wait to try it sometime! Our church has this in the youth room and it is a big hit.