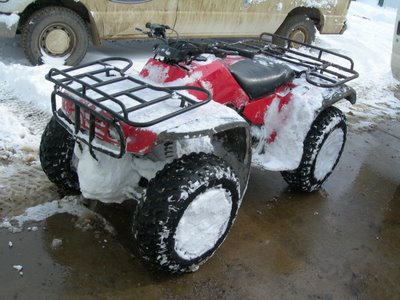 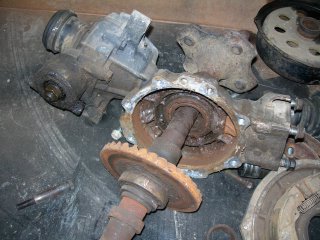 This is the ring and pinion in the rear diff. 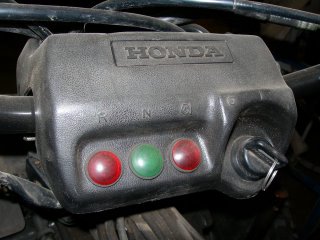 OK about three months ago I decided to purchase a Honda 300 4X4 that was, well, pretty well shot. The rear end was shelled (it is shaft drive), as well as the front. The brakes were shot, air box cover was gone, the lights were bad, battery was dead, carb leaked, flat tires, broken ignition, rear hub was welded on, engine oil leaked, etc. Well with all that I didn't know what to expect next!
So I decided to start stripping it down until I had it down to the frame and the engine. I figured out what I needed for parts and I got most of them on Ebay. The rear end cost $760.00, the front end was $300.00 and the whole rig was only $200.00! But now I have them.
I went through the front hydraulic brakes and replaced the shoes. I checked the bearings and they needed replacement as well. It was a job! It took me half the time just to get out the old race! I was mad by the time I had it out. After that it didn't take long to finish up the rest.
I painted the front and back racks and the gas tank. The front bumper needs to be bent back straight and welded. I bought a winch and I have to mount it. It is really nice that the fourwheeler already has a utility plug so I don't need to run wires to the battery.
I filled the cells of the battery with sulferic acid and slow charged it to make sure that it took a good charge. It was a challenge to figure out the electrical system but I got that all up to good working condition.
Next I tightened all the loose nuts and bolts. I put on the front rack and bumper to make sure that it was in the right position before I welded it ( it was broken from being smashed into a tree).After I got it into position I welded it with our wire feed welder on setting 2 for the temp it welds at. I let it cool off for a while and then I took it off to paint it. I painted it gloss black.
I bought a new ignition and dash lights on Ebay for $70.00. When I went to put it on part of the handlebar was in the way (it was an aftermarket handlebar with the bar that goes over the top.). By the time I got the old dash off it was torn to pieces! I took off the handlebar and ground off the part that was in the way and painted it gloss black ( it was white and ugly!). After it dried I put it back on the machine, attached the throttle, and the electrical center. I tightened on the new dash and ignition and hooked up the wires. I hooked up the battery so I could test it. Everything worked great!
Well as I said earlier the rear end was shot. I looked around a little to see how much it would cost new. I found out that just the ring and pinion was $550.00!!!!! I decided to see how much a whole used rear end costed on ebay. They were about $800.00! $250.00 more than just the ring and pinion! Since the rear brakes were shot, the bearings were bad and one of the hubs was welded on I decided that it would be better to just get a whole rear end.
Once I got it, I bolted it on and checked the brakes. The brakes were good.. Next I checked the gear oil and it was low from shipping (it ran out of the breather hose) so I got some SAE 80 gear oil and filled it to where it was supposed to be.
I did the same to the front.Next I put the wheels on and filled them, put the plastic fenders on the front and back, connected all of the wires to there respected places and tried to start it. I t started! I shut it off and enjoyed the glory for a moment and that was when I saw something. The carb was leaking!
It was no big deal except for the fact that I have to take off the gas tank, seat, and part of the frame! I took all that stuff off and cleaned the carb. I put everything back together and then I turned on the gas................................It didn’t leak!
I had to go try driving it and it worked good. But later on it started getting dark so I started checking out the lights. In the front someone had cut off the wires so I had to put new ends on them and connect them. I turned on the lights and they both worked but when I put the high beam on, only one of them worked. So I have to get a new bulb.I bought a new LED tail light that is supposed to last like 20,000 hours. IT IS AWESOME! 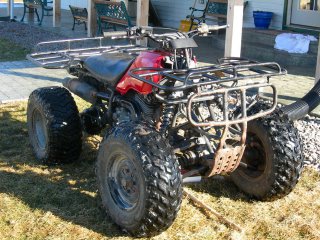 This is it (without the plastic).